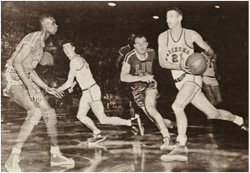 The Beta Phi Sports History Project has made considerable progress over the past six months under the leadership efforts of Jerry Tolle, Linn Wallace and Lisle Payne.

Tolle and Wallace were varsity baseball lettermen who played for varsity coach  Frank Sancet, a Beta Phi, during the 1955-60 time period.

Tolle and Wallace also noted that while a number of Beta Phi athletes were All Americans or achieved national champion status, only Roger Johnson achieved All American status in two sports – basketball and baseball.

Sports History Project Goal: To provide Beta Phi Alumni, undergraduates and future guests to the new Beta Phi house with an interesting and historic perspective of Beta Phi sports history. The sports history project will involve attractive display cases and sports memorabilia which will be displayed in the public area of the new Beta Phi house. In addition to historic team photos (baseball, basketball, football and polo) from the 1930’s and ’40’s, the display cases and certain wall areas will be focused on the following:

It is anticipated that members of the Sports History Steering Committee will be meeting with the Sigma Chi Building Corporation Board in May to discuss the current Beta Phi house construction plans and to review the Steering Committee recommendations. It is anticipated that the initial Sports History Project funding efforts will be undertaken in June following the completion of the first phase of the Beta Phi  House Capital Campaign.