Constantine and Our Heraldry

What the Founders drew upon

College fraternities, like many other institutions, have a set of signs, symbols and mottoes to define and express their beliefs and ideals. The significance of such heraldry is rooted in centuries-old tradition. Heraldry served to identify a soldier and to unite him with those who stood for the same cause. Then, as today, the heraldry worn by a group held the key to the ideals and motives that inspired them to reach greater heights. Before going into battle, knights blazoned themselves with a coat-of-arms, a crest, a shield upon which was painted the escutcheon, and possibly a badge. If the Knight wore a badge, he wore it proudly, for it was his only way to distinguish himself in battle.

Sigma Chi has a heraldry rooted deep in tradition that has grown out of many ideas, much thought and tireless research. The seven Founders understood the chief elements of Sigma Chi heraldry, including the White Cross. They admired the courage of those ancient warriors who were willing to fight—even to die—for their ideals. Consequently, our heraldry is influenced by a legendary feat of the Emperor Constantine, a man who demonstrated remarkable commitment to an ideal. 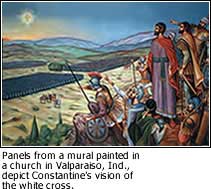 Constantine was born in 272 A.D. and grew to become a fine soldier, ultimately achieving the rank of Supreme Emperor of the Roman Empire. Marching toward Rome on Oct. 27, 312 A.D., Constantine’s forces were pursuing the armies of Maxentius, a challenger to the crown. According to legend, Constantine, before going into battle, saw a cross in the sky with the Greek words en toutoi nika. Derived from the Latin translation, in hoc signo vinces, its meaning is, “In this sign you will conquer.” Early the next morning, Constantine dreamed that a voice commanded him to have his soldiers mark upon their shields the letter “X” with a line drawn through it and a mark across the top. Because this was the symbol of Christ, the battle took on the significance of a holy cause, and, in fact, is considered an important event in religious history; many believe this marks the beginning of Christianity’s surge in popularity over the pagan beliefs previously held in favor by the masses. Its significance for Sigma Chi, however, is Constantine’s discovery of the noble principles in which he believed and for which he was willing to battle.

The Founders drew inspiration from the story of Constantine and thus from Constantine’s vision. The significance of the design of the Sigma Chi badge, the White Cross, and of our public motto, “In Hoc Signo Vinces,” is therefore evident. The words of our Founders remind us, however, that “only as the ideals for which this badge stands take possession of my heart and become exemplified in my life will I ever know the true meaning of the White Cross of Sigma Chi.”

As it was more than one century ago, the display of Sigma Chi heraldry identifies the wearer as a believer in a set of principles, and consequently “demands more of him than it does of other men.” Thus, the heraldry of Sigma Chi provides much more than ornamental value—it also identifies all who wear it as a Sigma Chi and marks them as men of high ideals, noble purposes and strong character.

Our Insignia and Heraldry